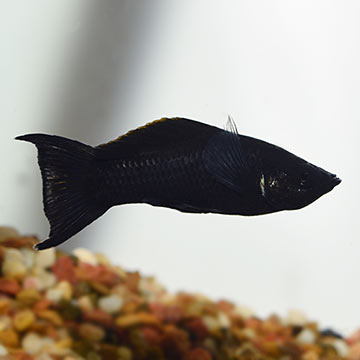 The Black Lyretail Molly is a hybrid variation of Poecilia latipinna, the Sailfin Molly. The Black Lyretail Molly is black with white highlights on its fins, and has a somewhat lyre-shaped caudal fin. Mollies have the ability to adapt to a variety of salt levels in the aquarium. With a gradual acclimation, these fish may be maintained in either a freshwater or saltwater aquarium. In the freshwater aquarium, a teaspoon of aquarium salt per gallon is recommended for optimum health.

The Black Lyretail Molly prefers a tank of at least 30 gallons with plenty of strong plants such as Java Fern, Sagittaria, Vallisneria,and Anubias. They require a good filtration system because of their hearty appetites and resulting waste products. The Black Lyretail Molly is well suited for the community tank because of its peaceful nature, and is compatible with other peaceful, large fish that can withstand similar water conditions.

The Black Lyretail Molly is omnivorous and that prefers both meaty foods as well as algae. Provide these fish with an algae-based flake food, as well as freeze-dried bloodworms, tubifex, and brine shrimp.

Write a Testimonial | Ask Customer Service
Tim Cahill Arlington , MA
I've had a male black lyretail molly for 7 months now and he's been surprisingly hearty and randy! He's made more than a couple of my female dalmation mollys pregnant and the fry looking really cool. He's an impressive fish, especially when he starts to do his mating dance. Highly recommended!
Dante Edwards Buford , GA
Well, to tell you the truth, I just got him today. He is very peaceful and I'm sure he will make friends with the Swordtail (also recently bought). He is wearing out the Buenos Aires who has been attacking the other fish. If an 8 year old boy thinks this fish is amazing, so will you!
1-2 of 2 testimonials