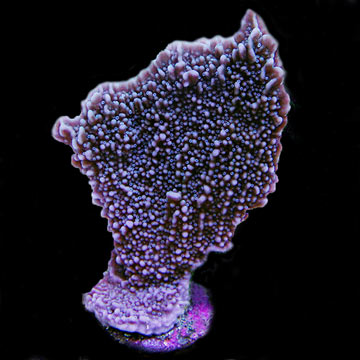 The ORA(R) Aquacultured Periwinkle Plating Montipora Coral is a captivating color morph sporting soothing shades of blue and purple. Its periwinkle-colored body provides a beautiful backdrop for the vibrant turquoise-colored polyps. Combined with its plating habit, the effect is at once exhilarating and calming for a true eye-catching addition to any coral reef display.

The ORA Aquacultured Periwinkle Plating Montipora Coral is peaceful in temperament and can be placed in close proximity to other similar peaceful corals in the reef aquarium. Aquacultured Montiporas are one of the easier to maintain SPS corals and grow rapidly in the established reef aquarium. It will require moderate lighting combined with a medium water movement within the aquarium. For continued good health, it will also require the addition of calcium, strontium, and other trace elements to the water.

The ORA Aquacultured Periwinkle Plating Montipora Coral will thrive in a variety of lighting conditions, ranging from power compacts, T-5s, powerful LEDs up to the more intense metal halides. Alter their position in the aquarium depending on the lighting mentioned above.

The ORA Aquacultured Periwinkle Plating Montipora Coral, is attached to an aragonite block and can be easily placed in holes or between the rockwork of the reef aquarium.