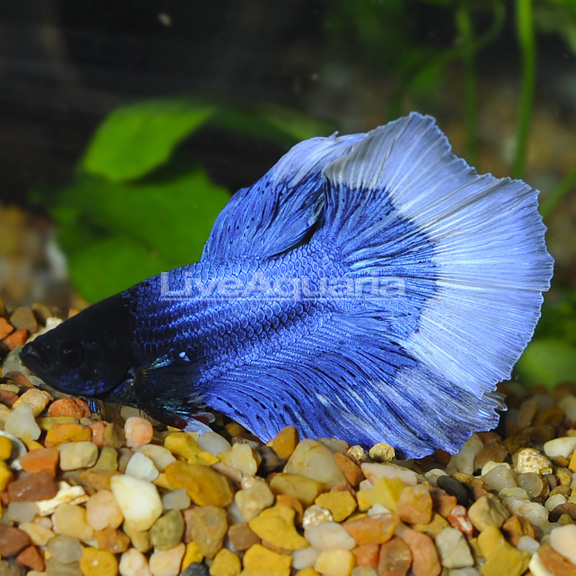 The male Halfmoon Butterfly Betta is part of the Betta splendens genus and species that is popular among home aquarists around the world. Because of careful breeding, the varieties of coloration, tail shape and body patterns are quite expansive and adds to their prized status.

LiveAquaria® has added a male Halfmoon Butterfly Betta to its collection that has been raised in our own LiveAquaria® facility and will add immediate interest to your freshwater aquarium from day one. It boasts a caudal fin that forms a semi-circle or half-moon shape and has an iridescent body. Coloration variations range from shades of saturated blues to ones of multicolored splendor in irregular patterns of blue, orange and cream. Reward yourself with hours of viewing pleasure that this specimen delivers.

Members of the Belontiidae family, they can make their homes in smaller aquariums of 4 gallons or more because of their size (2 ½” in length). In nature, Bettas live in heavily planted slow or standing bodies of water. In the home aquarium, an ideal environment is one that maintains a stable temperature between 75° and 86°F, carbonate hardness of 0-25 KH and pH levels of 6.0-8.0 and is well planted.

With an easy care level and peaceful temperament, even beginning hobbyists can achieve success keeping this beautiful species of freshwater fish. If kept in a community aquarium, they can be housed with peaceful fish that will not nip at their glorious, flowing fins. Only one male Betta should be kept in an aquarium.

For breeding purposes, male and female Halfmoon Butterfly Bettas can be temporarily housed in a breeding tank. Once the female lays the eggs, she should be removed. Eggs are placed inside a bubble nest that has been formed and tended by the male Betta. Fry appear in about 24 hours and must be fed very small food initially, such as crushed or powdered flakes and newly hatched brine shrimp. They will also accept finely chopped hard-boiled egg yolk.

The Halfmoon Butterfly Betta is a carnivore, and its diet should consist of a quality flake food, Betta pellets, bloodworms (frozen or freeze dried), and brine shrimp.