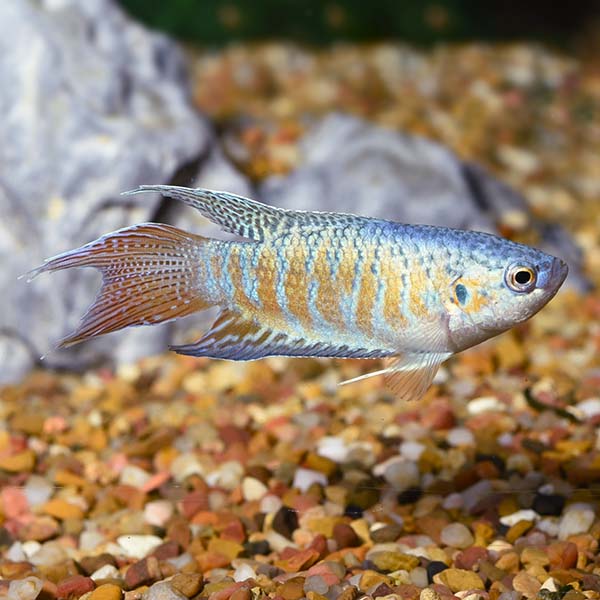 The Blue Paradise, also known as the Paradise Fish, is a brightly colored member of the Labyrinth Fish group. The body has alternating turquoise blue and orange stripes that extend into the fins and tail. There is a spot on the gills, and a pattern of dark scaling on the head reaching over the back and fading as it goes down the back. The fins and tail have a feather-like appearance, like that of a Betta. The Blue Paradise is a good jumper, so a tight fitting lid is a must.

The Blue Paradise requires a larger aquarium, at least 30 gallons, with lots of hiding places for the female. It will not eat plants, but because of its active courtship and mock battles between tank mates, only very hardy vegetation is advised. The Blue Paradise is a territorial fish that will defend its area from its tank mates. For this reason, it should only be kept with other large, semi-aggressive fish. It will also eat smaller tank mates. Adult males should be kept one per aquarium, as they fight as fiercely as Bettas.

The male Blue Paradise has much longer fins than the female and is more brightly colored. To induce spawning, reduce the water level and increase the temperature. The male will build a bubblenest beneath a large leaf where the eggs will be stored. Breeding is relatively easy, and spawning can result in up to 500 fry. When the fry are hatched they should be fed infusoria, and when older, brine shrimp.

The Blue Paradise is an omnivore and requires both algae-based foods as well as meaty foods. An algae-based flake food, along with freeze-dried bloodworms, tubifex, and brine shrimp will provide these fish with the proper nutrition.

Write a Testimonial | Ask Customer Service
Christine K Melbourne , FL
Contrary to most of the information on this fish, I have found them to be non-aggressive. That is, if you keep only one male total in a tank, or one male and a female. They are a very hardy fish, and a beautiful addition to an aquarium. Their powder-blue appearance is a nice contrast to the reds of some livebearers.
SungJae Y Ringwood , NJ
I have about two dozen of these paradise fish which are over 3 years old. They are the hardiest fish I've ever kept. Mine are not aggressive towards each other as it's been described. Its very cute to see them sleep gathered in a group. When I approach the tank in the morning, they rise one by one to be fed.
John D Sonora , CA
Mine was very shy, but came out of hiding for food. He liked to eat krill and algae wafers I would leave for my algae eaters! Very pretty fish to watch. I like to leave the water a few inches lower than normal because this fish sure likes to jump!
Basil B Jacksonville , FL
This has become my favorite Labyrinth fish. They are very intelligent, and definitely add character to any aquarium of tropical freshwater fish. I have a male and female pair. Mating them was easy, but keeping the fry alive the first time around ended up as a failure. I’ve got a second batch that is doing excellent. I’ve learned that floating vegetation whether artificial or real will make a big difference. Some say out of a batch of 500 eggs you’ll only get two that will totally mature. Well I have six, beginners luck I guess, but either way these fish are very easy to care because of their resiliency.
Cody F Newport News , VA
I have had two of these fish, male and female in my tank for almost three whole years. They are a very hardy fish and are beautiful additions to any aquarium. My two fish have survived through an ick infestation, moving from a smaller tank to a larger one (3x its size) and another ick infestation. These are trully a remarkable fish, and I recommend them for any fish lover.
Joshua Cohen Baltimore , MD
Be careful when ordering online! I ordered 3 of them assuming atleast one would be female, but they are all males and being very aggressive to each other! Looks like I'm about to lose one to being picked on, :(
1-6 of 6 testimonials