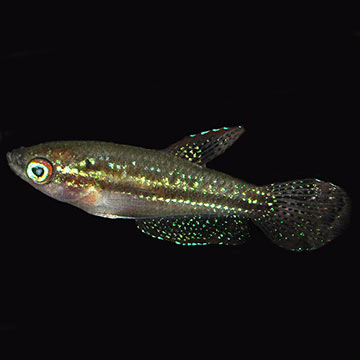 The Sparkling Gourami is a petite gem of freshwater aquariums. With its gorgeous golden body speckled with flecks of iridescent red and fins adorned with blue and green spots, the tiny Trichopsis pumilus is simply stunning. In spite of its beauty, the Sparkling Gourami remains humble and peaceful towards its tankmates.

Native to the shallow rice patties of Thailand and Cambodia, the Sparkling Gourami can survive in the low water level conditions with diminished oxygen levels. Because it is adapted to close quarters, the Sparkling Gourami only reaches a total length of about 1-1/2". However, for the best care, this member of the Belontiidae family should be housed in an aquarium at least 10 gallons in size.

The only way to differentiate the male from the female Sparkling Gourami is by illuminating the fish with bright light and looking for the ovaries of the female. When ready to breed, the male Sparkling Gourami builds a bubblenest and then begins to entice the female by swimming back and forth, flaring his fins and raising his tail. When this behavior is noticed, the water level should be reduced to 6 inches. After spawning, the female should be removed to a separate aquarium as the male may become aggressive toward her. The male Sparkling Gourami will tend the eggs until they hatch. After the eggs have hatched perform frequent water changes, especially during the third week, as this is when the labyrinth organ is developing. The fry should be fed infusoria and nauplii.

The Sparkling Gourami is an omnivore and requires both algae-based foods as well as meaty foods. An algae-based flake food, along with freeze-dried bloodworms, tubifex, and brine shrimp will provide these fish with the proper nutrition.

Write a Testimonial | Ask Customer Service
Claire G Tulsa , OK
These are lovely little fish. They are really quite shy and mine spend a lot of time hiding in the plants but they are very pretty fish. Half the fun is trying to find them! Easy to keep but be careful if you have fish with big mouths as these little guys can be slightly smaller than a cardinal tetra so could be easily picked on by bigger fish. One of the nicest gouramis, I think.
Kemper S Clay Center , KS
Wonderful little fish. Beautiful and curious. Plus you can sit there and listen to them make croaking noises. Love these little guys
1-2 of 2 testimonials