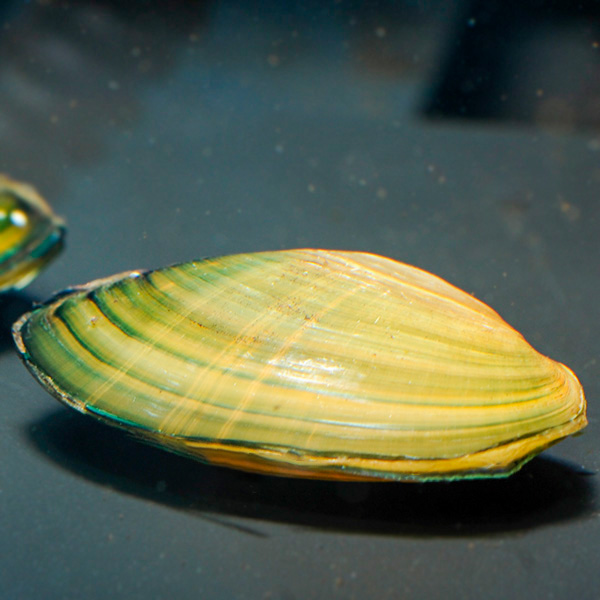 The Freshwater Clam is a living filter that helps keep aquarium water clear and clean. By removing uneaten food and detritus from the water column, the Freshwater Clam helps maintain water quality and lower nitrate levels. Like many freshwater bivalves, Corbicual sp. typically buries itself in the substrate. However, spotting its siphon protrude from the substrate is truly captivating to observe. This variety of the Corbiculidae family only reaches a length of about 2", which makes it a suitable addition to well-established aquariums of almost any size.

Though found in temperate freshwater rivers and lakes around the world, this species originates in Asia and has a brown shell, banded in black. For best care, house the Freshwater Clam in an aquarium of at least 10 gallons with medium to very fine substrate. The Freshwater Clam should not be housed with invertebrate-eating fish, such as freshwater puffers.

Write a Testimonial | Ask Customer Service
Benn O Somerworth , NH
Very clammy. They sit at the bottom of the tank, but when they do actually do something its quite entertaining, watching them open their shells is quite fun. they do move around a tank slowly but they do from day to day...
J. Smith Petaluma , CA
So cute! I highly recommend these beautiful clams. I added three to my 42 gal. tank, and they burrowed into the sand overnight. We like to look for their "mouths" which stick up out of the sand and catch food. They have made perfect little water cleaners for my community tank. A good choice for those looking for a more natural way to aid filtration and control nitrate.
Liz R Philadelphia , NJ
I keep these in my turtle tank. I clean my 30 gallon half as often as I used to. What a lifesaver. Not to mention it looks really cool when that little white tongue or whatever it is pops out.
Zach S Edison , NJ
I have one of these in my 20 gal tank, and I absolutely love him. He buried in the gravel overnight, and even though you never see him move, it's in another spot every day.
1-4 of 4 testimonials