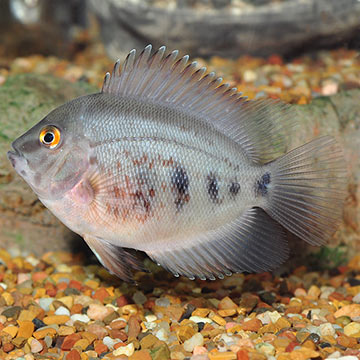 The Uaru Cichlid, also known as the Triangle Cichlid, is originally from the backwaters of the Amazon basin of South America and is now being captive bred. The coloration of these fish at maturity is mostly brown with a prominent horizontal black stripe covering the mid-section. Immature specimens are mottled in brown and black. They will typically achieve their adult coloration at about 4 inches in size.

The Uaru Cichlid requires a minimum aquarium size of 70 gallons or more with a fine gravel bottom. Plenty of rocks, driftwood and even flowerpots are recommended for hiding. They are a peaceful fish that is territorial and rarely aggressive, except during spawning. It can easily be kept with other medium-sized cichlids such as Convicts, Firemouths, and Parrots.

It is difficult to differentiate between the male and female Uaru Cichlid. It is best to incorporate 4 to 6 juveniles into an aquarium and allow them to pair off. They will form lasting pairs and make a nuclear family. The fry are usually well cared for, but the parents may eat some of them. Water should have a pH of 5.5 to 7.0 with an ideal temperature of 79-83°F. Uaru Cichlid are open breeders and the female will drop from 100 to 1000 eggs. The female will circulate water over the eggs by fanning them with her fins, carefully guarding them in pits. After hatching, the fry will feed upon the slime coat of the parents until they become large enough to accept prepared foods. Feed the fry baby brine shrimp, ground flake foods and other foods designed for freshwater fry.

Uaru Cichlids are omnivores, and will eat most prepared and frozen foods, including freeze-dried bloodworms, tubifex, and ocean plankton, as well as flake food and Cichlid pellets.

Write a Testimonial | Ask Customer Service
Jack C Birmingham , AL
They have some interesting behaviors that are fun to watch. They are good tank mates with my angel fish, marble hatchets, Columbian tetras and, corys. The only complaint I have is that they are very rough on my plants. They uproot and chew on swords, chain swords, and jungle val daily even though I try to supplement with algae disks and bio blend herbivore.
James L Cumming , GA
I appreciate Uaru for their subtle beauty. As juveniles they are black with white spots. The spots would eventually disappear to be replace by a large blace triangle. They need warm water, neutral pH, and high protein food - such as krill and freeze-dried worms (any kind-they love them all). They are social if raised from a group of young fish. I hear that babies live and feed off of parent's slim, just like the discus.
1-2 of 2 testimonials