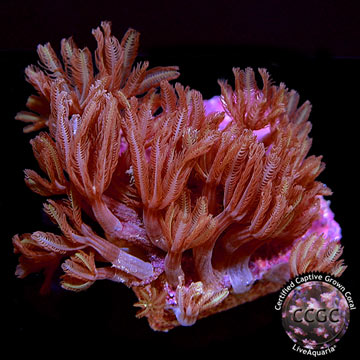 Glove Polyps have the distinctive eight-leaved tentacles associated with all the members of this family. They are colonial animals with several individual polyps attached to a hard surface and are often stung and damaged by other aggressive corals. Therefore, they need adequate space between themselves and other corals. The parent colony of these coral frags was originally collected in Jakarta, Indonesia, was maintained in house for several years, and then quarantined and given a health inspection before being propagated.

They are not difficult to maintain and require moderate lighting combined with moderate water movement. They will grow rapidly in the established reef aquarium by encrusting over adjacent rock work or even other corals.

The symbiotic algae zooxanthellae hosted within their bodies provide the majority of their nutritional requirements through photosynthesis. They will benefit from the addition of zooplankton.