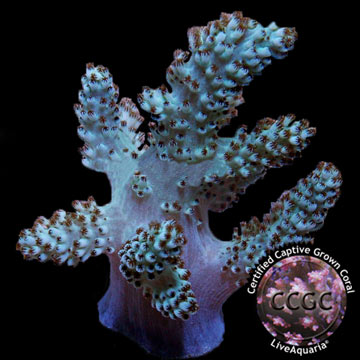 The Neon Pineapple Tree Coral has a thick trunk, like a tree, and many short thick branches giving it an arboreal appearance. When the polyps are contracted, the surface of the coral resembles a pinecone or pineapple. The parent colony of these coral frags was originally collected in the Soloman Islands, was maintained in house, and then quarantined and given a health inspection before being propagated.

It is not normally considered a threat to hard corals since it does not expand much, but may itself be disturbed by their presence. The Neon Pineapple Tree Coral relies less on the symbiotic algae within it, and depends more on obtaining outside food. Microplankton, marine snow, and dissolved materials should make up the bulk of its diet.

Write a Testimonial | Ask Customer Service
Will Doh Bellerose , NY
It is kind of a pretty coral. However, it is neither neon, nor blue, nor anything like a pineapple. It is a Kenya Tree. Not worth the money in the long run.
1-1 of 1 testimonials