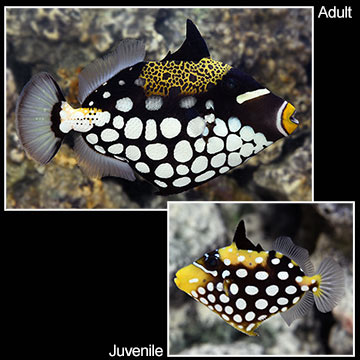 The Clown Triggerfish needs a varied diet of meaty foods including; squid, krill, clams, small fish and hard shelled shrimp to help wear down their ever growing teeth.

Write a Testimonial | Ask Customer Service
Lawrence B San Diego , CA
A beautiful and very sought after fish! The Clown Triggerfish is an easy fish to keep - easy to feed and easy to acclimate. Recommend putting this fish in last though. Due to its aggressive nature, it can be the most aggressive fish and can "rule" the tank.
Desdre D Burlington , AK
I've had a Clown Triggerfish for about a month now. "Spot" is about 2 inches from head to tail. He was very shy at first, but now recognizes me a source of food, and is more outgoing. I rate this fish a 10 out of 10 for his neat personality and magnificent coloration.
Michael J Paso Robles , CA
The Clown Triggerfish is a beautiful fish. Mine gets along with a Leopard Shark, Nurse Shark, Purple Tang, Pinktail Trigger, Miniatus Grouper, Tessalota Moray and a Sappo Puffer.
Conway L. San Francisco , CA
My Clown Triggerfish is the best and friendliest fish in my tank! He is nice to all my inverts and fish and doesn't bother them at all! He also gets excited and makes grunting noises when he sees me and wants food. He'll take food straight from my fingers.
Melissa R Woodland Hills , CA
Everyone always told me I'd end up getting rid of my Clown Triggerfish because he'd eat everything in my tank. Well, they were wrong, he is now a foot long and is 100% personality. He never bothers any of my other fish, which include a Blue-spotted Sting Ray, an Imperator and a Blue Face Angel, a Naso Tang, a Moray Eel, a Dogface, a Humu Humu, 3 Blues Streaks, Lionfish and 2 Black Tips.
Lalaine S Los Angeles , CA
This is a most excellent fish. It gets along well with the Tangs, Imperator Angel, and Rabbitfish in my 390-gallon aquarium.
David Y Yorba Linda , CA
This is a fish with character! He dances back and forth at feeding time and comes up to the top taking food from my chopsticks. Along with my Golden Puffer, these two big boys get their meals delivered to their mouths. Although he has a reputation as the big bully of the tank, I have found that as long as he doesn't need to fight for food with other fish, he is cool. At 12" long, he is the biggest fish in my 240-gallon tank. He gets along just fine with seven other triggers, one large Golden Puffer and some smaller fish. He's fun, hardy, and beautiful!
Peter M Howell , NJ
A beautiful fish that is easy to care for and has a great appetite. Can hold his own with most fish and usually will not bother most aggressive species. Grows large when fed well. A great fish with personality. Hard to keep when small. You must get a medium or large one. Fairly aggressive. Some get more aggressive with age. Very attractive fish.
Ray B Chico , CA
I must say that i have ordered on line from another source based in Florida I had ordered 3 fish one dead on arrival one died later due to being severly stressed the other has done great. I now have ordered 3 from liveaquria and i must say i am highly impressed in the health and quality of the fish. My latest aquisition being a large adult clown trigger. Very gorgeous trigger and was eating within a few hours of being put into my tank. This alone speaks to the quality and health of their inventory. Thankyou liveaquaria.
Mike R NY
i put my clown trigger in my 450 fish only tank he gets along with my snowflake eel,panther grouper,,moon wrasse,magnificent fox face,blue velvet damsel, piccaso trigger,garibaldi damsel, dragon wrasse, harlequin tusk,fu manchu lion fish,moorish idol,orangeshoulder tang,2 blue throats male and female, a convict tang, 2 yellow tangs, and a banana wrasse. he only seems to likes my damsels everyone else seems really scared of him hes like the big boss of the tank when i put queen trigger in today when he saw the queen it looks like shes the new tank ruler but i knew the clown was more scared of the queen great tankmate for me and my other fish :)
Mike C Bend , OR
Beautiful fish! I purchased one of the captive bred ones and WOW!!! Peaceful non-aggressive and growing like a weed!! Started eating right away! Would buy from anytime!!
1-11 of 11 testimonials