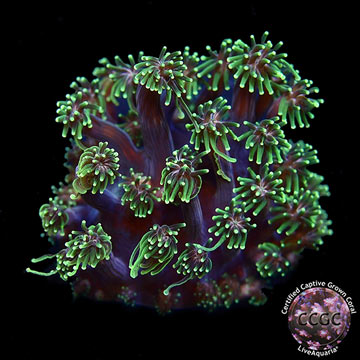 Green Long Polyp Galaxea Coral is a large polyp stony (LPS) coral and often referred to as the Tooth, Star, Crystal, Starburst, Brittle, or Galaxy Coral. This color variety is a green. It is an aggressive coral in the reef aquarium, and therefore, needs adequate space between itself and other corals. Its polyps can extend up to several inches at night and will sting and cause damage to other species of corals that it can reach.

Galaxea Corals can live in a variety of lighting conditions, ranging from power compacts, VHO, T-5's up to the more intense metal halides. Alter their position in the aquarium depending on the lighting. In an aquarium lit by metal halides, Galaxea Corals should be kept in a mid to low position, and under other lighting they should be kept in a mid to high position. To bring out the most intense coloration of this coral, we recommend metal halide lighting along with moderate waterflow. For continued good health, they will also require the addition of calcium, strontium, and other trace elements to the water. They will benefit from the addition of zooplankton.

The Green Long Polyp Galaxea Coral is mounted on a small fused aragonite plug that can be placed easily and securely in or between the rockwork in the reef aquarium.