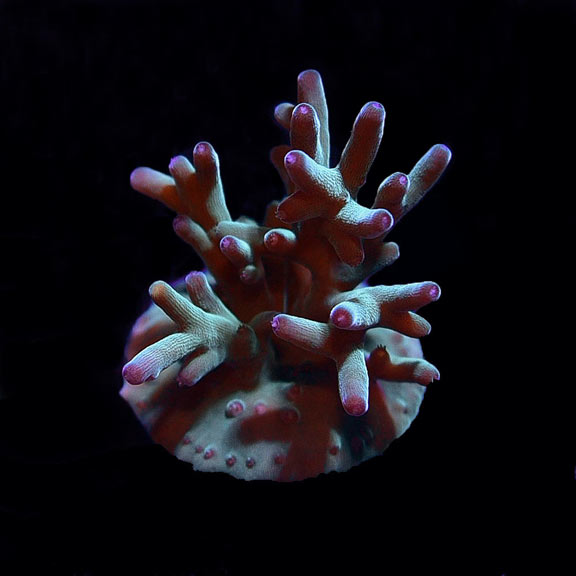 The Hawkin's Blue echinata Acropora Coral is a new release from Oceans, Reefs & Aquariums . A delicate tubular branched bottle brush Acropora coral, this color variety features stunning sapphire blue polyps. According to , this frag is named after coral facility manager, Robert Hawkins, and originally acquired from a hobbyist in Germany in 2006.

Acropora Coral prefers a high light level of at least 5 watts per gallon provided by metal halide lighting combined with strong intermittent water current within the aquarium. For continued good health, it will require the addition of a two part calcium and buffer supplement in order to maintain a calcium level of 400-450 ppm and dKH of 8-12. It will benefit from the addition of zooplankton.

The Hawkin's Blue echinata is mounted on a small black plastic plug that can be placed easily and securely in or between the rockwork in the reef aquarium.

Write a Testimonial | Ask Customer Service
Ian G Belmont , CA
One of my favorite ORA acroporas. Hawkins Echinata has the best coloration, especially under 14-20K T5s. Growth rate is on the slower side, but the tips of the coral turn purple under good light and makes the coral look even better.
1-1 of 1 testimonials