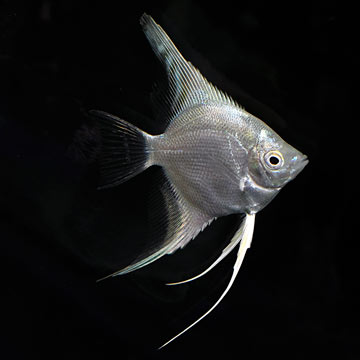 “Showcase this recently-discovered angelfish that's rare as platinum! Platinum Angelfish are said to have been originally derived from the line of Gold Angelfish, the result of two copies of a recessive gene. Even as juveniles, Platinum Angelfish display a brilliant white sheen, and as the fish matures, a greenish-blue tint only further enhances the exquisite beauty of this extraordinary aquarium inhabitant.

It is best, when trying to breed the Platinum Angel, to house a number of angels in the same aquarium until they pair off. After a pair has developed, a flat surface needs to be provided where the eggs can be laid. A piece of slate, a large plant leaf, or even a flowerpot should be positioned at an angle of about 30 degrees in an area of moderate water flow. The female will lay the eggs and the male will follow behind to fertilize. After approximately three days, the eggs will hatch and the fry will emerge. Feed the fry newly hatched brine shrimp until large enough to accept crushed flake food.

The Platinum Angel needs to be fed a variety of foods including vegetables as well as meaty foods. Feed a quality flake food as well as live and frozen foods such as brine shrimp and bloodworms.

Write a Testimonial | Ask Customer Service
Emmalee K Oxford , MS
This fish is the star of my 55 gallon planted tank. He's absolutely beautiful--a stunning pure iridescent white with stripes of bluish sheen on the dorsal fin. He is very curious and interactive, following me when I walk by the tank and my finger when I move it along the glass. He gets along well with the marble angel that I already had, as well as all my other fish (rams, apistos, cardinals, guppies, kuhli loaches, and glass catfish). He arrived in great health and has grown quite a bit in the couple of months I've had him so far. I love this fish!
Stephanie C Easton , PA
I have had my Platinum Angel for 3 weeks now and what a pretty fish. I am starting to see the blue coming on the dorsal fin. Just like the other 4 angels in my tank as soon as they see me they think it is time to eat. This fish came in very healthy and was eating the same day. Great looking fish.
1-2 of 2 testimonials