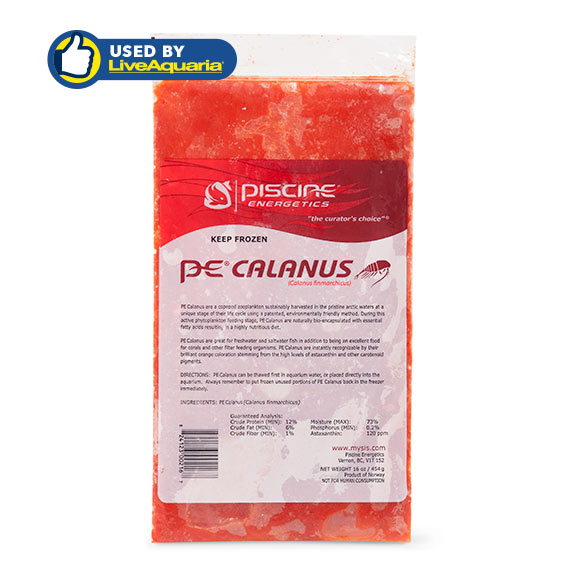 Feeding Instructions
PE Calanus can be thawed first in aquarium water, or placed directly into the aquarium. Always remember to put frozen unused portions of PE Calanus back in the freezer immediately.

General Information
PE CALANUS are a copepod zooplankton sustainably harvested in pristine arctic waters at a unique stage of their life cycle using a patented, environmentally friendly method. PE CALANUS are instantly recognizable by their brilliant orange coloration stemming from the high levels of astaxanthin and other carotenoid pigments.

PE CALANUS are naturally bio-encapsulated with essential fatty acids, resulting in a highly nutritious diet. They are frozen as whole specimens, which means there is no loss of nutrition. PE CALANUS are great for freshwater and saltwater fish; in addition to being an excellent food source for corals and other filter feeding organisms.

About Piscine Energetics
Piscine Energetics Inc., headquartered in British Columbia, Canada has been revolutionizing the ornamental aquaculture and aquarium industry through innovation in aquatic nutrition. Piscine Energetics MYSIS SHRIMP (PE MYSIS) is a nutritionally complete fish food sustainably harvested from the pristine glacial lakes of Canada. For over a decade PE MYSIS has been used by aquarium hobbyists, mariculturists, ornamental aquaculture facilities, and research institutions around the globe, earning a reputation as "the curator's choice" within public aquarium circles.

History and the Formation of Piscine Energetics
Mysis diluviana, commonly referred to as opossum or mysis shrimp, were introduced into freshwater lakes in British Columbia Canada in 1966. These organisms were introduced in hopes of boosting the productivity of the lakes, providing extra forage for game fish; particularly Kokanee Salmon (Oncorhynchus nerka) and enhancing the fisheries industry. Decisions for the introduction were based on several other lakes that observed increased productivity within a few years after the introduction of Mysis diluviana. In the beginning, fish populations rose variably for the lakes, but then began to collapse. Scientists discovered that Mysis diluviana is a good prey item for large Kokanee, but not for Kokanee aged less than one year. The major food source for young Kokanee in these lakes is a small zooplankton species called Daphnia, otherwise termed the "water flea." Unfortunately, Daphnia is also the preferred food item for Mysis relicta. This lead to competition for the same food source but the shrimps are more efficient predators than the Kokanee. They feed during the night, whereas the Kokanee do not, and they have a rapid generation time. Mysis shrimps have few predators and normally inhabit different zones of the lake than the Kokanee. To make matters worse, deep lakes provide vertical migration for the mysis shrimp to avoid adult salmon predation and promote rampant reproduction.

In the late 1990's the Ministry of Environment of the Province of British Columbia was searching for a way in which to help restore the native Kokanee salmon and trout fishery by targeted removal of the now invasive Mysis diluviana. Through the development of a special patented fishing method, whereby shrimp are captured live with no by-catch (salmon, trout or other non-targted species), Piscine Energetics is the ONLY company allowed to fish for mysis at night. The mysis come from the 500 foot pristine glacial lake depths to feed on highly nutritious algae at a depth of 20-30 feet that naturally enriches PE Mysis. The end result is a shrimp that has been caught in whole condition, flash frozen with elevated levels of Omega 3 and Omega 6 fatty acids. These are important nutritional lipids in many marine fish and other aquatic organisms. Since 1998, Piscine Energetics has pioneered the harvest of freshwater mysis shrimp and continues to provide the most sustainable, highest quality aquatic food on the market.

Mission Statement
Piscine Energetics is passionately committed to providing the highest quality aquarium and aquaculture food on the market today that surpasses and outperforms all competitors in quality and value!