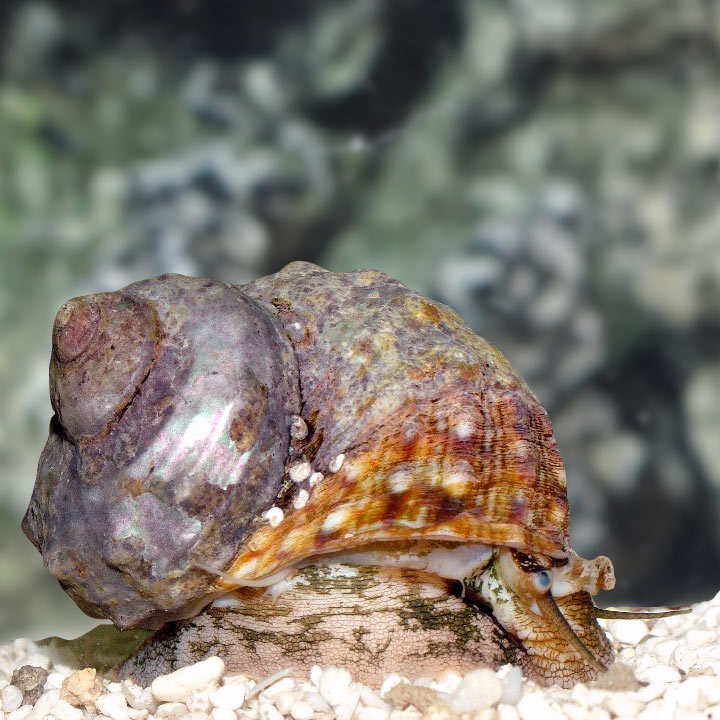 The Turbo Snail is extremely popular among reef aquarium hobbyists, since it quickly eliminates large amounts of nuisance algae. It is particularly fond of hair algae and will consume mass quantities of it and other algae off your live rock and aquarium glass. Also known as the Turban or Top Shell Snail, Turbo fluctuosa has a thick, top- or turban-shaped shell with an irridescent interior. The Turbo Snail is native to the Gulf of California off the coast of Mexico.

An excellent member of your aquarium's cleanup crew, the Turbo Snail thrives in crevices and holes in natural reefs. In the home aquarium, the Turbo Snail needs ample hiding places and large spaces to graze. Some reef aquarists prefer to keep the Turbo Snail in aquariums with well-secured rockwork since this active herbivore is known to bulldoze loose rocks in search of food.

The peaceful Turbo Snail should not be kept with aggressive tankmates that can quickly overcome this slow-moving creature. If algae levels are insufficient, supplement the diet of the Turbo Snail with dried seaweed. Also, adequate calcium levels are required to help this member of the Turbinidae family build its protective shell. Like other invertebrates, the Turbo Snails is very sensitive to copper-based medications and high nitrate levels. To acclimate the Turbo Snail, employ the drip-acclimation method since it is intolerant of even the smallest fluctuations in water parameters.

Turbo Snails are normally not harvested from July-September and will be unavailable to purchase due to the extreme heat in Mexico. The Margarita Snails are an ideal substitute to Turbo Snails during these months.

Write a Testimonial | Ask Customer Service
Wei Yang Atlanta , GA
If you have problem with red cotton algae, this is the only species that will help cure that problem!
Ken Santos Concord , CA
Highly recommended for its substantial cleaning ability. Because of its size, I nicknamed it Freight Train. It will constantly graze the glass and rocks for algae. Make sure all of your coral is glued down tight, as this thing loves to climb aboard anything and everything in search of food. It's a tireless eater as well, sleeping only a few hours a day. It's weird to see it "lick" the glass while it eats, leaving tell tale lick marks. It's a sight to see. A weird relationship has instantly developed between Freight Train and my new Abalone. They love to clean each other's shell. Who knew!
Steve Spahr Algonquin , IL

These things decimate hair algae and I have had some live for 7 years, growing to the size of golf balls. You can't go wrong with these if clean up is your goal.
Amber Harper Exeter , RI
Wonderful creatures! My live rock was covered with brown algea and within minutes the two I bought cleaned the entire rock! They have a long way to go but they are cool to watch (being snails) and I would reccomend them to anyone who needs a good cleaner!
Matthew Levine Wabash , IN
WOW these are huge snails! I had a hard time with them when I first put them in. I ordered 12 and I had to take them apart from each other so many times. Then, finally, I just relocated them all. However, they are the best snails for cleaning algae.
Luis Rodriguez Laguna Vista , TX
I left for a trip to Japan and came back to a 12 gallon Nano Cube filled with hair algea! I added 2 golf ball sized Turbos and in 1 week they cleared the tank!
Timothy Ware St Louis , MO
This snail is a machine and named appropriately! I like the way their foot moves in a stepping motion. We have bought several and they are the best I have found in controlling green algae. Highly recommended for keeping the aquarium free of unwanted algae.
1-7 of 7 testimonials