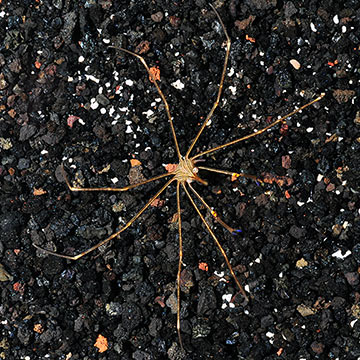 The Arrow Crab, also known as the Spider Crab, has extremely long legs. It is called the Arrow Crab because of the shape of the body and head. The size is variable, many reaching six inches, and some up to 10 inches. Females may be dramatically smaller. Different species inhabit different parts of the world. The most common Arrow Crab (Stenorhynchus seticornis) comes from the Caribbean, but other species are imported from the Indo-Pacific region, eastern Africa, and California. They normally inhabit portions of the reef usually associated with a small cave or crevice.

It is a hardy, long-lived invertebrate, that can be housed in the reef aquarium. This crab has been known to attack crustaceans such as Banded Coral Shrimp, and may even attack small slow moving fish. All crabs are opportunistic feeders and if insufficient food is present they may pick at mushrooms or polyps searching for food. However, Arrow Crabs may provide the beneficial service of eating smaller Bristle Worms which some consider pests. Breeding Arrow Crabs in the aquarium is not generally successful. Larvae are free-swimming and hatch in about two weeks. It will accept almost all meaty, flake and tablet foods.

I didn't think my aquarium had any bristle worms, until a couple weeks after I got an arrow crab. I came home from work one day to see him chomping away at half of one that was about half an inch thick! The one I received from LiveAquaria.com is pretty large, but it doesn't bother any of my fish, cleaner shrimp, urchin, or anemones. Sometimes he pushes my little puffer away if the puffer gets too close. I don't worry about him getting hungry; he eats everything.
Kevin D Strongsville , OH
My Arrow Crab eats a lot off my live rock. It's definitely a conversation piece when people come to visit.
Nick P Nantucket , MA
Mine is looking great in my tank already munching away happily on my diatoms. Great crab!
Carolyn D Roslyn , PA
Love this interesting little fellow! Always looking for food even in the hard to reach places with some of his arms while shooing off fishies with the others. He/she looks cool and keeps corals clean. What a fun little invert!
Jeannette K Hastings , MN
I love this guy, going to get more. Cleaned up my brissle worms. And the comment about the Manderines Golbys. I have 2 and 2 Scotter Blennys, they have no problem with each other.
Harlan G McAllen , TX
Arrow Crab should not share a tank with Mandarin Goby or any other small bottom fish. It is aggressive towards fish smaller than it is.
1-6 of 6 testimonials