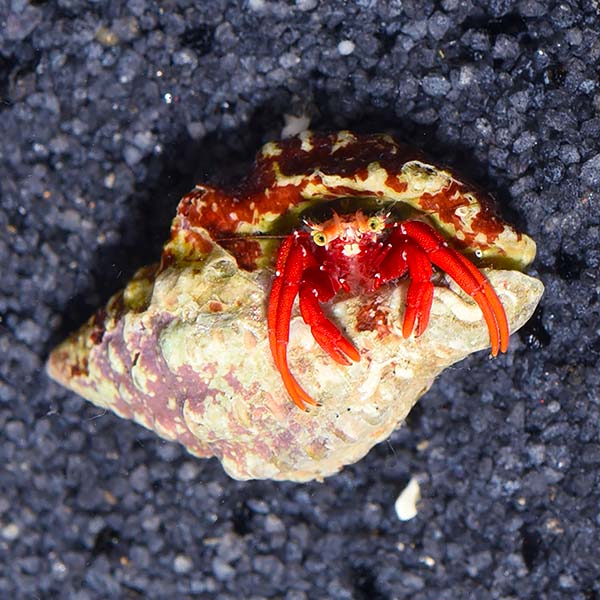 It is easy to see why the Scarlet Reef Hermit Crab is one of the most popular reef maintenance animals. Paguristes cadenati is very hardy and requires minimal care in a well-established system. More importantly, however, these small hermit crabs have a voracious appetite for detritus and algae. In fact, they are particularly fond of nuisance algae of the filamentous, hair, and slime varieties, as well as cyanobacteria. Finally, unlike some hermit crabs, most Scarlet Reef Hermit Crabs are very peaceful towards their tankmates.

Also known as the Red Reef or Red Legged Hermit Crab, the Scarlet Reef Hermit Crab is named for its bright red legs, which are contrasted by their yellow face. Native to the reef faces and coral rubble of the Caribbean and Western Atlantic, these active scavengers can consume large amounts of animal matter and algae. Despite their large appetites and constant feeding habits, the Scarlet Reef only grows to an adult size of 1-1/2" in length.

In the home aquarium, Paguristes cadenati is best kept in an established reef system with ample algae supplies. However, they will eat almost anything, including fish food and invertebrate diets. If algae levels are insufficient, supplement their diet with dried seaweed and other marine foods.

Like other hermit crabs, an ample supply of empty shells should be available for the Scarlet Reef Hermit Crab to move into as they molt and grow. As with all invertebrates, they do not tolerate copper-based medications and extreme fluctuations in water parameters. Also, take special care to ensure an invertebrate-friendly environment free of predators.

Write a Testimonial | Ask Customer Service
Jeremy P Bradenton , FL
These guys are always on the move, eating algae off of my live rock, and constantly turning my sand looking for more to eat. Great personality and easy to care for. A must have in a reef tank.
Todd V Hillsboro , OR
Awesome crab to have for your clean-up crew. I have about 35+ in my 75 gallon and algae and waste are kept in check. They leave my corals alone and don't bother my snails either. Highly recommended! A must have for the reef tank!
Sherry K Hillsdale , WY
These are a favorite in our aquarium. We have about 30 of them and they, with the snails and other crabs, have my live rock looking polished and beautiful. No more hair algae or diatoms!
Justin Melbourne , FL
I love these little guys. All day long they are constantly picking away at detritus and nuisance algea in my tank. And as an added benefit, a few of the crabs I received came with shells covered in purple coralline, which has since spread throughout my tank thanks to the crabs constantly moving on the rocks.
Erik Trumbull CT
These are nice looking hermits and do an ok job with cleaning. Would not say they are the best for solo clean up crew. They are nowhere as active as Mexican red legs. I have literally seen some of my scarlet sit on one spot for an entire day even had to poke them to make sure they were alive. They do bring some nice color to your clean-up crew but do not rely on them solely.
Kristy S Martinsburg , WV
These are very hardy crabs and are a great addition. They eat everything! They do not bother my mushrooms and climb everywhere in search of algae. Very good cleaners for the tank. Much hardier than blue legs.
1-6 of 6 testimonials