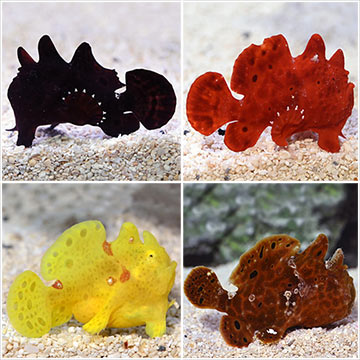 The Assorted Anglers can range in color from tan to grey to brown. Their body can also change color to blend with the surrounding environment over time. They require large amounts of live rock in a 30 gallon or larger aquarium.

When first introduced into the aquarium, live saltwater feeder shrimp should be used to entice this fish to eat. An angler may eat any small inhabitant of the tank (crustacean or fish) that is lured into its mouth with the use of an esca (modified first dorsal spine) that looks like a small, tasty fish. It will accept most meaty meals including feeder fish and shrimp.

Write a Testimonial | Ask Customer Service
Adam K Charleston , SC
I have one of these in my 90 gallon reef. He started eating frozen silversides and simply waits at the top of the tank for me to feed him. I dropped two clowns in the tank that a friend gave me and he ate them within an hour. They were about 1-2 inches. So yes these fish will eat anything they can get in their mouths.
David Y Linda , CA
This is an interesting and hardy fish, but don't feed him too much because he doesn't know when to stop. Mine started eating frozen food on the very first day, and he hardly sat still waiting for food. I fed mine so much smelt, beef heart, and squid that he was literally stuffed to death. If I ever get another one, I'll control the food intake.
Deborah M Mason , NH
The Angler has been a hardy addition to my tank of aggressive fish. I did however, have a common cleaner that he ate. I believed if he remained well fed he would leave the cleaner alone. I learned that even well-fed, the Angler can, and will, eat any fish small enough. He gets along well with the Lionfish, Lunare Wrasse, Emperor Angelfish, Triggerfish and Hogfish. He has grown fast and is a good 3" and growing.
Kim W Kingsland , GA
I ordered 2 of these guy's and they are doing great. They are eating and are just amazeing to watch. As alway's , I'm impressed and satisfied with Dr Foster's and Smith's livestock. I have ordered many times from them and have not had a complaint yet. This company I highly recommend for healty,quality livestock.
1-4 of 4 testimonials