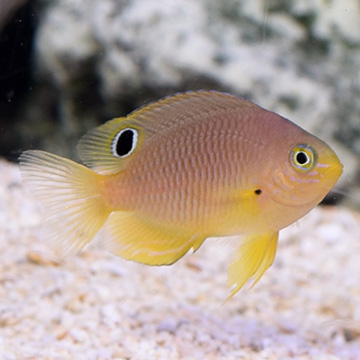 The Ambon Damselfish is a darting marine fish with primarily yellow with significant pink coloration present throughout, along with some black markings, including spots on the top of the operculum and another on the upper pectoral fin base. Juveniles have an ocellus, or “eye spot” on the soft dorsal fin which fades as the fish grows.

Found in the tropical marine waters of the Indo-Pacific, the Ambon Damselfish is commonly distributed off the coast of north-western Australia down to the central coast of New South Wales.

The Ambon Damselfish is a hardy fish suitable for beginners and is also a great choice for reef aquariums with invertebrates. Similar to many other Damselfish, the Ambon Damselfish has a semi-aggressive disposition and does best when housed in a spacious environment large enough to easily accommodate multiple specimens.

The diet of the Ambon Damselfish should consist of flaked and frozen foods, and herbivore preparations.