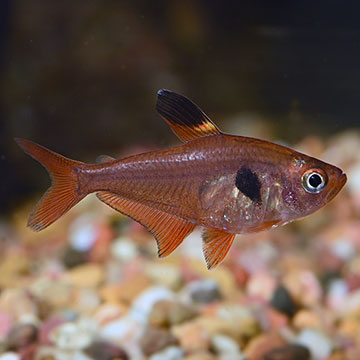 The red Phantom Tetra is a colorful addition to any freshwater community aquarium. The striking color pattern of the semi-transparent red body is accented with darker red markings in the fins. The schooling nature of the Red Phantom Tetra creates an impressive display when kept in a school of at least six or more individuals.

The Red Phantom Tetra is a member of the Characidae Family that is often confused with the similar Serpae Tetra. In the wild, these eye-catching tetras are found in the tributaries and rivers of Columbia, South America.

The ideal aquarium setup for the Red Phantom Tetra should include a variety of live plants, rocks and driftwood to recreate natural habitat and provide hiding spaces. Similar to other tetra species, the male Red Phantom Tetra will have a longer more pronounced dorsal fin than the plumper female.

The natural diet of the Red Phantom Tetra consists primarily of small insects and planktonic animals. However, it will accept frozen or freeze-dried brine shrimp, daphnia, bloodworms tubifex, as well as micro pellet food and high-quality flake foods.