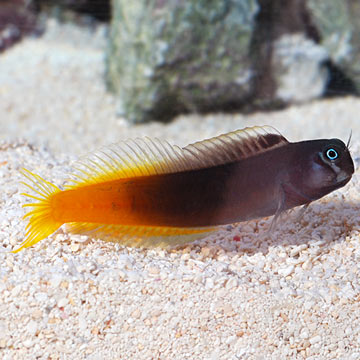 The Bicolor Blenny is also known as the Two-colored Blenny. The Bicolor is so-named because the anterior half is blue to dull brown, and the posterior half is dull orange. Males are generally larger than females and experience a succession of color changes, including blue, when breeding. These Blennies exhibit great personality in the aquarium.

Generally found amid crevices and rocks on the bottom of its environment, the Bicolor Blenny needs a tank of at least 30 gallons with scattered rocks for perching and hiding.

These fishes are normally peaceful tank members, but have been known to pick at other blennies, smaller gobies and dartfish. They normally make a good addition to reef aquariums, but use caution in smaller set ups, or with smaller fleshy corals, as they have been know to pick at the mantles of clams, and at fleshy large polyp stony corals when underfed. In larger reef aquariums they rarely do damage to these corals or clams.

The diet of the Bicolor Blenny should include vegetable matter, including frozen and dried foods containing marine and blue-green algae. It will also feed on (and help control) algae growing in the aquarium.

Write a Testimonial | Ask Customer Service
Dustin A Raceland , LA
I have had my Bicolor Blenny for almost a year. He is the most fun and the easiest fish I've ever had!
Michael T Westport , CT
I believe the Bicolor Blenny is not an aggressive fish. I have a couple in my 180-gallon aquarium and they get along with everything. I have many healthy invertebrates and corals and I have never seen the Blennies try to eat them.
Michael P Tuscaloosa , AL
Although a little shy at first, my Bicolor Blenny is very cute and likes to watch everything going on around him. He is a great addition to my tank.
Chris S Menomonee Falls , WI
The Bicolor Blenny is a great fish for any tank. I couldn't have hoped for a nicer fish. It gets along well with Clowns, Chromis and even my Dartfish. Buy with confidence.
Noli F Cleveland , WI
My Bicolor Blenny is not agressive towards my clowns, tangs, damsels and basslet. It also can co-exist with my yellow watchman goby. However, it chases the other smaller bicolor blenny every time he sees him. I like the way he backs into barnicle holes and openings. He is an agressive eater. He will go after my toothpick feeder during feeding time and competes with the clowns for food.
Josh B Missoula , MT
I have had a Bicolor Blenny for a year and a half. It's an amusing fish to watch, but is aggressive with my Firefish. It likes to attack from underneath the Firefish, and turns a pinkish color with yellowish stripes along its body. It has never harmed the Firefish though.
Sean W McCook , NE
Bicolored Blennys are the all time best blenny you can buy. He travels from mushroom to mushroom using them as a bed when he's not in a dart hole. Loves to pose for the camera. You will love this fish.
Josh D Southampton , PA
My Bicolor Blenny is not aggressive towards my two Clowns, Six Line Wrasse or Tang. The Blenny is amusing to watch. He loves to come out and explore but any time he gets frightened, he goes right back into his territory. He is like a Muppet for your fish tank.
John B Louisville , KY
A joy to watch in the aquarium. I've ordered two specimens at different times from LiveAquaria, both have arrived extremely healthy and are active members of the tank a day or two after acclimation. The color changes they exhibit are great to watch.
John R Seattle , WA
This is a great fish. Hilariuos to watch!! mine gets into all sorts of antics. one time he niped my pom pom crab and got smacked with the crabs symbiotic anenomes and shot off into his hole!!
Michelle W Hauser , ID
My favorite little fish, be cautious if you get more than one they fight over territory. I have three in our 350 gallon tank and they are at opposite ends of the tank from eachother.
Justin K Minneapolis , MN
Wonderfull, awesome, full of personality. I love bi-color blennies and hope to always have one in my tank. This one seems more colorful than I have seen before, with a rich yellow tail that has some vertical stripes of heavy yellow. Nice.
Cade R Santa Barbara , CA
My Bicolor Blenny doesn't get along too well with my two mated pair of clowns right now. Their anemone is right in front of his favorite hiding spot so sometimes they go at it. But he is a fish with a lot of spunk and once the anemone moves, on everything will be back to normal.
Beau B Swanville , MN
This Blenny is very fun to watch. He cruises around the aquarium, then returns to his hole in the live rock and backs up into it. Very comical and fun for the whole family!
1-14 of 14 testimonials