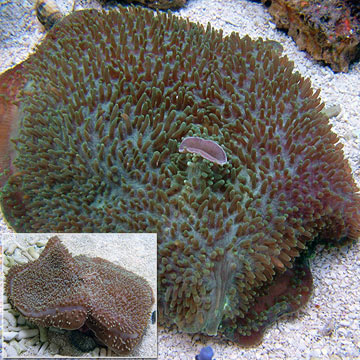 The Giant Cup Mushroom is also known as the Giant Disc Anemone, Giant Mushroom Anemone, or Giant Flower Coral, and sometimes the Large Elephant Ear. These corals are typically green in color, but can also have shades of tan and brown, depending on the lighting conditions. The Giant Cup Mushroom grows very rapidly in the aquarium, so adequate space should be allowed for its growth.

It is very easy to maintain in the reef aquarium with a medium light level combined with a low to medium water movement. It can expand to over 12 inches in diameter during the day. It is considered semi-aggressive and requires adequate space between itself and other corals. When a fish brushes against it, it forms a ball around the fish, from which the fish generally cannot escape. Since it eats fish, it is best kept in its own aquarium that has a sandy bottom and large rocks.

If kept in a reef aquarium, it should be fed large meals of Artemia and other plankton-like foods. It also receives some of its nutritional requirements from the symbiotic algae zooxanthellae hosted within its body.

It will arrive as one large mushroom attached to a rock and will expand to a larger size in the reef aquarium.