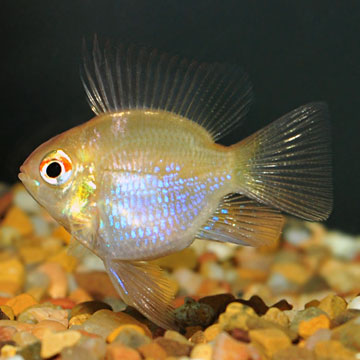 The Gold Angel Veil Ram is a beautiful color variation of Mikrogeophagus ramirezi with longer, veiled fins. It is a social fish that will form pairs and often remain "faithful" to each other. As its name suggests, the Gold Angel Veil Ram has an angelic appearance with a shimmering gold body and hints of iridescent pink, orange, and red coloration that beautifully complements flowing, wing-like fins.

The Gold Angel Veil Ram is an egg layer that prefers soft to medium hardness, neutral pH, and tropical water temperatures (77-82°F). Peat can be added to the water to make it softer and acidic. Female Gold Angel Veil Rams can lay up to 200 eggs on stones and occasionally, in depressions. Both the male and female share the rearing of the fry, and it has been reported that they will take them into their mouths to protect them like a mouth brooder. Care should be taken so that the fry are not sucked into the filter.