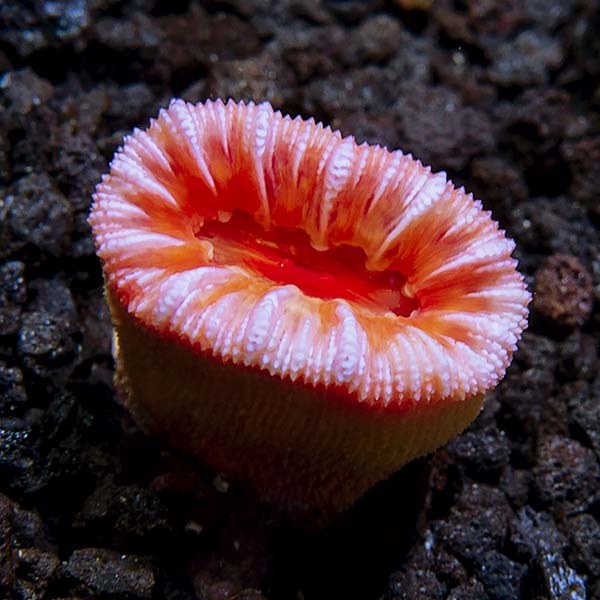 Balanophyllia are NPS (non-photosynthetic) corals belonging to the family Dendrophylliidae. These LPS corals are considered a single polyp species. There are over 60 species of Balanophyllia that inhabit just about all of the world’s oceans from subtropical, tropical and temperate waters. Balanophyllia are cryptic in nature and are often found colonizing deeper water structures such caves, ledges, and other rockwork.

To best recreate a natural habitat in the home reef aquarium, house your Balanophyllia in an established system with good filtration. Consider creating ledges, overhangs, or caves using live rock in your reef aquarium landscape. Balanophyllia corals should be placed in the lower to bottom section of the aquarium, in an area with subdued or dim lighting. Since these corals require target feeding, it is best to place Balanophyllia corals in an area that is easily accessible for spot feeding.

Being NPS corals that do not host photosynthetic zooxanthellae algae, which supplement coral nutrition, Balanophyllia require feedings of frozen/thawed foods such as calanus, brine shrimp and mysis shrimp. To ensure your Balanophyllia is getting proper nutrition, the addition of liquid supplements such as Selcon or VitaChem will be necessary and will be appreciated by these corals. Balanophyllia have transparent tentacles covered with spirocysts and stinging nematocycsts that help the polyp capture prey or food items.

Balanophyllia should be fed multiple times per week since this is their main source of nutrition. During feeding, consider turning off your circulation pump or turn the water flow low help prevent food items from drifting into the water column. The use of an efficient protein skimmer is highly recommended to effectively remove uneaten food particles and maintain high water quality.

For continued good health, Balanophyllia Corals will also require the addition of calcium, magnesium, and other trace elements to the water.