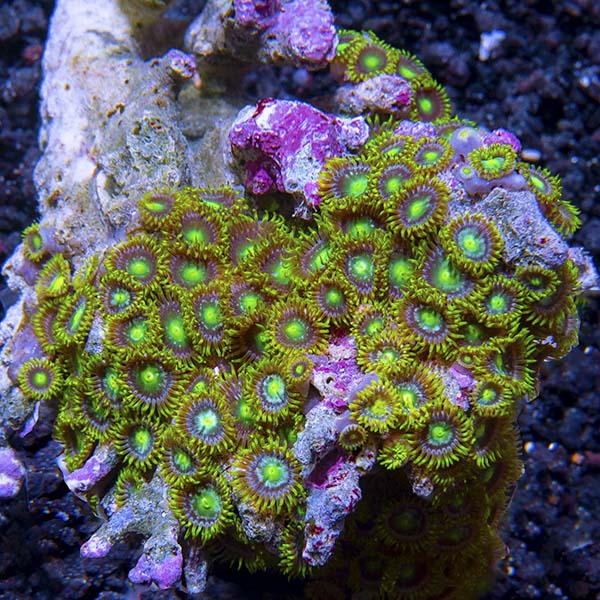 The Zoanthus Colony Polyp Corals are also referred to as Sea Mats, or Button Polyps. Their most common color is green, but are also found in other bright colors, such as orange. They are colonial animals with multiple individual polyps attached to a piece of live rock. Pictured above are the two common forms of the super colored colony polyps and the coloration that you will receive will depend on availability.

These polyps have the ability to sting other polyps or corals. While the sting is not strong, they are semi-aggressive and need to have space between their colony and any neighbors since they tend to crowd them out. They are easy to maintain, making them a good choice for beginner reef aquarists. They require a high light level combined with a medium water movement within the aquarium. For continued good health, they will also require the addition of iodine and other trace elements to the water.

They will reproduce easily in the reef aquarium by budding (splitting off a portion of their base or mouth), which will increase the size of their colony.

They contain the symbiotic algae zooxanthellae which provide almost all of their nutritional requirements. Especially if the lighting is not optimal, they should be fed micro-plankton or baby brine shrimp.

Write a Testimonial | Ask Customer Service
John Owen Polo , IL
These polyps are great! Very bright coloration, very resiliant, and they spread to adjacent rockwork fast. These were the first polyps that I have ever had in my reef tank and I love them. They help fill in the "dead spots" on the rock work between the corals.
Lauren M. Overland Park , KS
Absolutely Gorgeous! I had no idea what to expect when ordering corals online for the first time. It's way more vibrant than I had imagined it would be. I’m very impressed!
Deb Piirainen Little Falls , MN
I just received my latest order, a medium rock of these, and they are absolutely gorgeous! They are bright green with orange centers.
Timothy Ware St Louis , MO
I was amazed at the rich color that these polyps have and they look amazing in our Nano-Cube reef aquarium. The specimen arrived in perfect health and has thrived, advancing the colony to the adjacent rockwork.
1-4 of 4 testimonials