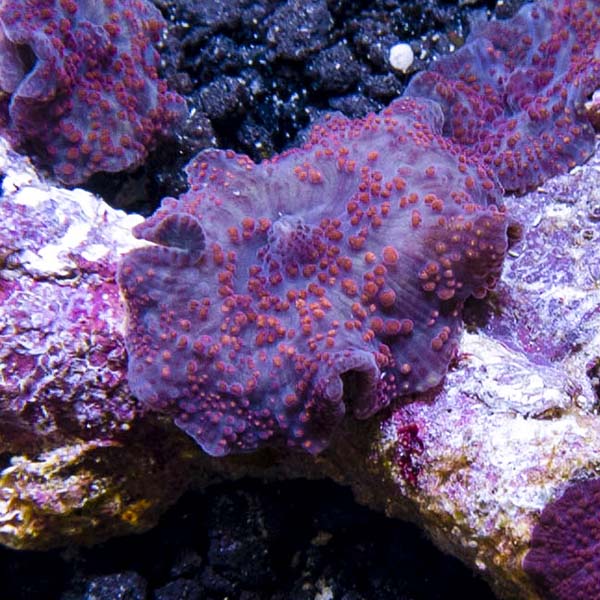 The Spotted Mushroom Coral is a beautiful, easier-to-care-for mushroom coral perfect for both novices and seasoned reef keepers. Featuring varying shades of contrasting coloration, the Spotted Mushroom Coral boasts decorative raised spots that add texture and visual depth culminating to a fabulous reef aquarium landscape. This effect will be enhanced once the Spotted Mushroom Coral establishes itself and begin multiplying. Actinodiscus Mushroom Corals, also referred to as Mushroom Anemones and Disc Anemones, were previously classified under the genus called Discosoma. These corals are found in a wide variety of colors, textures, and patterns. Some are solid colors, whereas, others are striped or spotted. Striped varieties are typically green. The taxonomy of the various species is in a state of flux and will probably continue to change.

The symbiotic algae zooxanthellae hosted within the Spotted Mushroom Coral satisfies the majority of its nutritional requirements from the light driven process of photosynthesis. The Spotted Mushroom Coral also feeds on other nutrients and particulate matter and benefits from additional food in the form of micro-plankton or brine shrimp fed to each polyp of the colony.