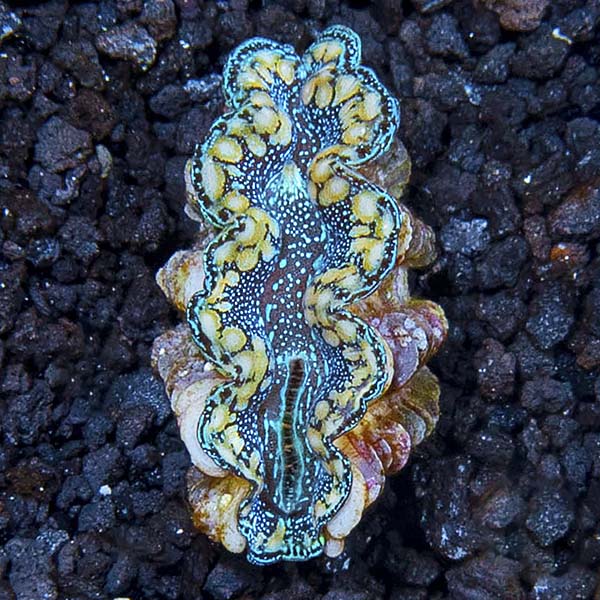 The Hybrid Maxima Clam will arrive either unattached or attached to small pieces of substrate. It will typically attach itself to a solid surface within a week or so of being introduced into your aquarium. Once attached to a solid surface, never forcibly remove an attached clam from the substrate or rockwork, as lethal damage to their foot and other tissue will be inevitable. Only as a last resort, consider removing an attached clam from a hard surface by gently cutting each byssal thread with a razor blade (as close to the attachment point of the rock or solid surface) making sure not to slice or damage any tissue.

The ideal setup for the aquacultured Hybrid Maxima Clam is a large established reef aquarium with bright lighting achieved with T-5s, powerful LEDs or the more intense metal halides. To maximize the growth rate of your aquacultured Hybrid Maxima Clam, it is imperative to maintain high pH, an alkalinity level between 8-11 dKH, calcium levels between 380- 450 mg/L, magnesium levels between 1280-1350 ppm, and phosphate and nitrate levels as close to zero as possible.

In addition to high lighting conditions and near pristine water quality, the aquacultured Hybrid Maxima Clam benefits from good, intermittent water flow within the aquarium. This is best accomplished with a wavemaker and multiple powerheads. For continued good health, the aquacultured Hybrid Maxima Clam requires the addition of calcium, strontium, iodine, magnesium supplements, as well as trace elements.

The photosynthetic symbiotic zooxanthellae algae hosted within aquacultured Hybrid Maxima Clam satisfies the majority of its nutritional requirements. Hybrid Maxima Clams larger than 2" do not require supplemental feedings, but smaller Hybrid Maxima Clams less than 2" should be fed micro-foods designed for filter feeders, phytoplankton, or greenwater supplements several times per week if maintained in a nutrient poor reef aquarium.