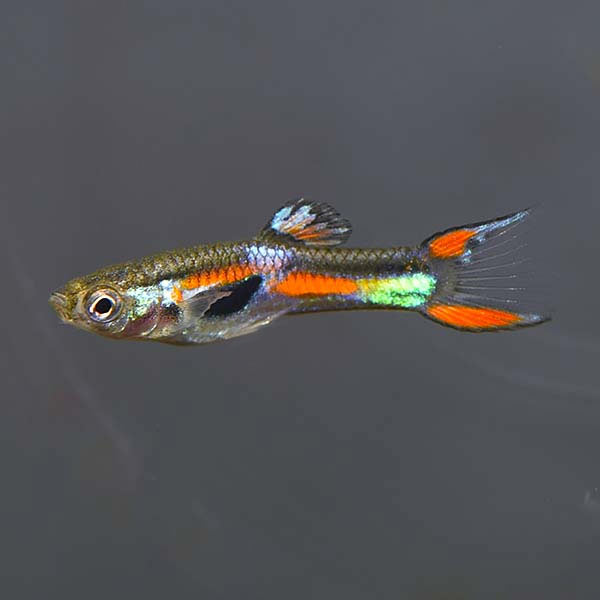 Endler’s Livebearer’s first collected by Franklyn F. Bond during the 1930’s in warmer harder water than many of the other live bearer’s that normally prefer cooler water temperatures. Later during the 1970’s Professor John A. Endler collected the Poecillia sp. in the northeastern part of Venezuela in the Laguna de Patos. The Endler’s Livebearer didn’t receive its common name until the 1980’s when colleague Dr. Kallman introduced the “Endler’s Livebearer” or “Endler’s Guppy” to the German aquarium community.

Over the years, the Endler’s Livebearers may have been hybridized to some degree with other live bearers (such as Fancy Guppies) to achieve the brilliant and unique colorations that are currently being offered by LiveAquaria.com as “Class K Endler’s.” The closest to the “True” Endler’s Livebearer offered is the Red Flame Endler’s Livebearer. Endler's Livebearers are becoming more common in the hobby, and gaining popularity thanks to their wild, psychedelic coloration and ease of care.

The Endler's Livebearer requires an aquarium with at least 10 gallons of water and is very tolerant of changing aquarium conditions. Plants should be hardy varieties such as Java Fern and Java Moss that can handle the increased hardness in the aquarium. Other peaceful fish would make good tank mates.

The Endler's Livebearer is an omnivore and requires both algae-based foods as well as meaty foods. An algae-based flake food, along with freeze-dried bloodworms, tubifex, and brine shrimp will provide guppies with the proper nutrition.