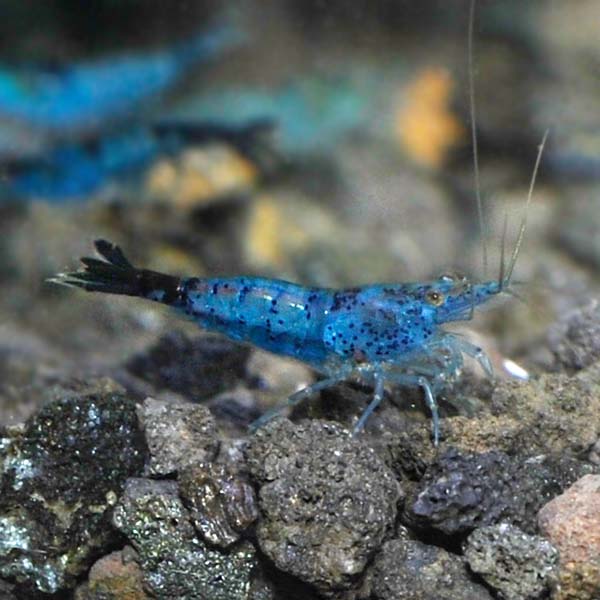 Blue Glaze Shrimp are beautiful and functional additions to any peaceful freshwater aquarium. Its unique blue coloration injects an unexpected pop of color while its purposeful pursuit for algae and organic debris adds wonderful activity to your aquarium landscape. A sprinkling of dark blue dots decorate a paler, lighter blue body color while darker (almost black) markings decorate random areas of the head, abdomen, and tail of the Blue Glaze Shrimp, making each individual a unique piece of living art.

If there is a male and female in your aquarium Blue Glaze Shrimp will most likely breed. The female will carry a clutch of yellowish eggs under her tail until they hatch in about 30 days. The newly born shrimp will look like miniature adult shrimp and will eat the same thing as the adults. If breeding these shrimp, it is important to keep them in a breeder aquarium with a sponge filter. This added precaution helps maximize survival of young, newly-hatched shrimp.

Blue Glaze Shrimp are omnivores that will consume algae, detritus and left-over food. If sufficient food is not present, supplement with algae tablets or quality flake food or pellets.