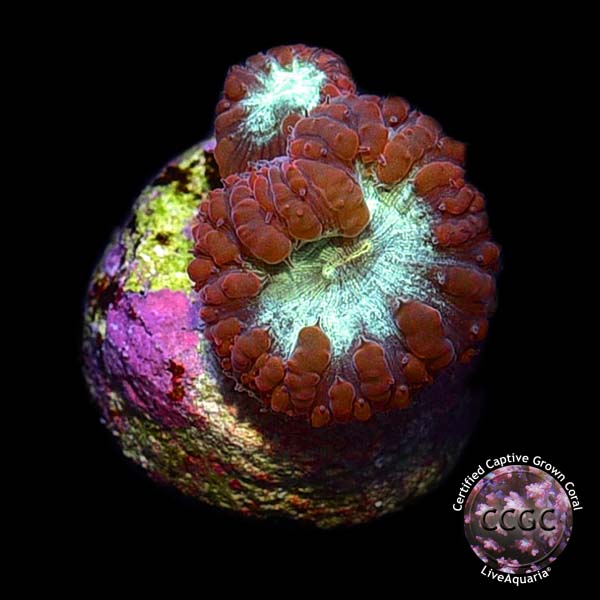 The LiveAquaria® CCGC Aquacultured Australian Big Polyp Blastomussa Coral is also referred to as a Branched Cup, Pipe, or Pineapple coral. It is a large polyp stony (LPS) coral that will form round, swollen discs when it grows. Due to its resemblance to mushroom anemones, Blastomussa corals are often confused with other brain and mushroom corals.

This Australian beauty has extraordinarily large polyps, and grows in fused, tubular clusters in a similar manner to its close relative Blastomussa merletti. The brood stock for these corals were harvested in Australia, quarantined and given a health inspection before being propagated.

Once established, the Australian Big Polyp Blastomussa Coral is moderately hardy, especially in an established reef aquarium. It does best in areas with low water flow and moderate light levels. It has no sweeper tentacles and is generally peaceful. Therefore, it may be placed near other peaceful corals or invertebrates. Most of the Blastomussa's nutritional requirements are met through photosynthesis via the symbiotic algae zooxanthellae that thrive in the coral's body. It does not require additional food to maintain its health in the reef aquarium; however, it will feed on micro-plankton or foods designed for filter feeding invertebrates.

This coral also benefits from the addition of calcium, strontium, and other trace elements to the water column.