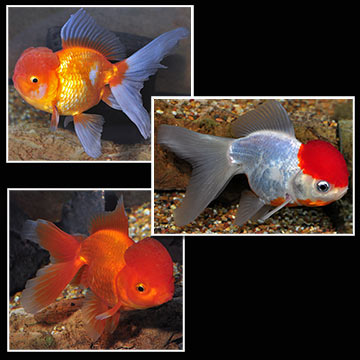 Assorted Oranda Goldfish offer hobbyists a great way to enjoy the different varieties of the beautiful Oranda Goldfish. These assorted Oranda Goldfish come in many color forms including the classic Red Cap, Red, Red/Black, Blue, Red/White, Calico, Chocolate, or Black Oranda - at a fraction of the cost of ordering any variety individually. Order 3 or more goldfish and save even more, while increasing your chances of getting one of each!

The Oranda is one of several varieties of what is commonly known as the Goldfish, Carassius auratus auratus. The goldfish originally came from parts of Asia, Japan, and China but now enjoys worldwide distribution due to controlled breeding programs. Though it resembles the Veil Tail varieties, the Oranda is notable for its "hood" that covers its head. Some Orandas have warty growths covering the entire head, including the opercula.

All Goldfish are members of the carp group and are generally quite hardy. The Oranda will do well in an aquarium of 30 gallons of water or more with a fine gravel bottom and cold-hardy water plants, or backyard garden ponds of 180 gallons or more. Goldfish are diggers and will scatter the fine sand onto leaves, injuring thin and less hardy plants. Roots and well-rounded river rocks are a good addition to the aquarium.

There appears to be a definite courtship ritual when Goldfish breed. Breeding often results in up to 1,000 eggs, with fry hatching in five to six days. The fry should be fed small pieces of live or prepared foods designed for egg-laying fish.

Oranda Goldfish are omnivorous and will eat all types of dried and live foods. Limit protein, however, to 30% of the diet. A flake or pellet food for goldfish will provide these fish with the proper nutrition.


I think they are the sweetest, prettiest breed of fish. If you want a beautiful, peaceful fish, this should be your first choice. But I recommend putting them in a large pond outside. They seem to get cramped in an aquarium.

Tracey Z Waltham , MA
Orandas are a wonderful breed of goldfish for the beginner. They're quite hardy and VERY people oriented. They're very sweet and playful. I call mine my 'wet puppies'.
Alex S Buford , GA
I love my Oranda Goldfish because they are active and playful and sweet. These guys keep me comany when I am lonely.
1-3 of 3 testimonials