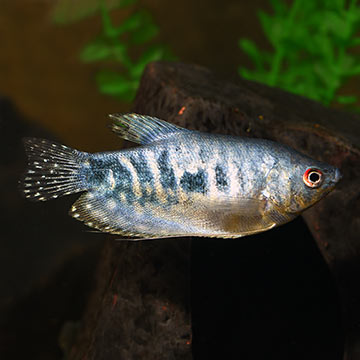 The Opaline Gourami is also known as the Marbled Gourami, and is a color variation of the Blue Gourami. This gourami is a rather peaceful fish that is very comical to watch as a juvenile. The Opaline Gourami is silvery pale blue, with darker blue markings. Opaline Gouramis are considered Labyrinth Fish, meaning they breathe directly from the air and must have access to the surface of the tank.

The Opaline Gourami is compatible with a variety of tank mates that are of similar size and temperament. While males can be territorial with each other, they become timid around other, more aggressive fish. The ideal tank set-up would be a minimum of 20 gallons and have plenty of live plants as well as rocks and driftwood for use as hiding places.

The best way to differentiate between the male and female Opaline Gourami is by the dorsal fin. In the male, the dorsal fin is long and pointed, while the female's is shorter and rounded. When ready to breed, the male builds a bubblenest and begins to entice the female by swimming back and forth, flaring his fins and raising his tail. When this behavior is noticed, the water level should be reduced to 6 inches. After spawning, the female should be removed to a separate tank as the male may become aggressive toward her. The male will tend to the eggs until they hatch. After hatching, there should be frequent water changes, especially during the third week, as this is when the labyrinth organ is developing. The fry should be fed infusoria and nauplii.

The Opaline Gourami is an omnivore and prefers both algae-based foods as well as meaty foods. An algae-based flake food, along with freeze-dried bloodworms, tubifex, and brine shrimp will provide these fish with the proper nutrition.

Write a Testimonial | Ask Customer Service
KateLyn B Elburn , IL
LOVE mine. His color is so flashy and his markings are very distinct. I have other colored Gourami but he always gets my attention. He is a character; I think he makes sudden movements to see his reflection and he and my other Gourmai play tag and are always showing off to each other. They are very easy to care for and get along great with my other Gourami and Angelfish. Would recommend this fish to anyone wishing to add color and a little bit of comedy to their tank.
Johnny A Chicago , IL
I would recommend purchasing any gourami, but I would especially recommend an opaline because they're colorful, funny, and cute to watch. Personally I enjoy them because they're very entertaining to watch and they're color is very appealing. But beware that they do have a tendency to become territorial. If you see them harassing the females don't be alarmed because its their natural way of trying to breed. Make sure you have plenty of hiding places for them or else you may face some bulling in the tank from your gourami's.
1-2 of 2 testimonials