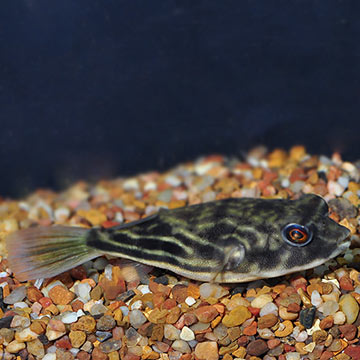 The Fahaka Puffer, also known as the Nile Puffer or Band Puffer, comes from the lakes and rivers of Africa and can grow to a very large size. They will inhabit both freshwater and brackish waters of the river systems, but tend to do best in freshwater in the home aquarium. The Fahaka is brownish gray on the back fading to an off-white on the underbelly, with a series of lighter horizontal stripes running from the tail to the pectoral fin.

The Fahaka requires a very large aquarium, and because of their temperament, are best kept by themselves. They can become very aggressive in captivity, and caution must be exercised when choosing tank mates. Many plants and rocks should be included in the set-up providing the Puffer with plenty of hiding places.

The Fahaka has not been successfully bred in captivity and little is known about their breeding habits. It is known that, in the wild, they spawn in very deep water.

Their diet should consist mainly of crustaceans such as brine shrimp, krill, mollusks, and earthworms.

Write a Testimonial | Ask Customer Service
Clare W Georgetown , KY
Heed what LiveAquaria is telling you about this fish! They get big, and fast. One needs 120g. They are extremely aggressive and will eat everything in sight. They must be fed crunchy foods, like clams, mussels, crabs, and crayfish. Otherwise, you may find your beautiful fish looking like a beaver! Feeder fish, such as goldfish, are not appropriate. This fish is not suited for a planted aquarium - they love, love, love to tear up your live plants. With all that being said, this is a beautiful and fascinating fish. Puffers learn to recognize their owners, beg for food, and act out in amusing ways. With the proper care, they will flourish.
Roger F South Portlande , ME
This fish gets huge. I would say a foot long and more. What is impressive is not the length, but the girth of the fish. I would suggest a tank wider rather than longer. Dog like
1-2 of 2 testimonials